It’s been a while since I had a dream about him.  Maybe a month or so.  But I woke up early this morning after visiting with him in my dream set at a pool party in college where he dropped by to support.  My Dad.

The dream was just an epilogue to the conversation I had with my wife the night before.  You see, Zane reminded me some months ago about his favorite thing about my Dad that he missed.  His laugh.  A sinking feeling overwhelmed me in that moment when he spoke this aloud.  I had somehow forgotten my Dad’s laugh.  By now I take no fault of my own.  It’s been years since I heard his booming yet somehow high-pitched laugh fill the house on Jordan Drive.  He wasn’t able to laugh much in his last few years of life because of his illness, so it’d been seemingly forever.  But that flood of memory that filled my heart that moment will always make me thankful for Zane.  He has a knack for saying the right thing to me when I need it, whether he knows he did or not.  If he hadn’t reminded me, it might not have been until last night that I recalled that wonderful man’s chuckle. 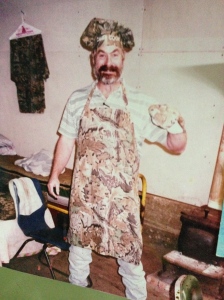 Lee Horn, Sr. didn’t laugh at comedies. No, sir.  Comedies weren’t funny to him.  You could hear his bellow when, and only when, the hero of the story rallied back from near-death by grabbing the villain’s AK-47 and spraying invisible bullets across his pixelated standard definition television in his bedroom.  Of course, no need to reload.  As each perpetrator of the story got what was coming to him in a sea of red-dyed corn syrup flowing into a pool of victory, my Dad would begin this overexcited laugh that would make my friends’ ears perk up as though they were border collies in the living room tilting their heads slightly in confusion and study.

So last night, as Jess, Emerson and I are watching Thorin, son of Thrain, son of Thror, rally from his gold sickness to lead the battle against the advancing Pale Orc’s army, I find myself trying to stifle a brewing cackle.  It was the first time I can ever remember getting that overexcitement that was about to turn into a laugh.  As the mighty dwarves and elven lopped off the heads of their enemies across the beautiful high definition television at the camp house, I was calling up that Horn family tradition from my gut.  The more we grow older, the closer, we realize, the apple has fallen to the tree. Like that orc’s head.

Then, as I’m trying not to laugh at the death and destruction on the screen, I look to my wife and explain what I’ve said here above.  The weirdest thing about it all, I don’t think she’s ever heard my Dad’s laugh.  A laugh that almost defined him in my childhood, and the woman I’ll spend the rest of my life with will never get to hear it.  That was a deeply sorrowful moment for me.

So many people in my life will never know the man I knew.  The silly side of his rugged exterior.  The hilarious laugh that shook the walls of my childhood home.  The reckless nature he approached life at the lease all the while still protecting those close to him.  For those of you who knew this man as I did, and I’m so thankful you did know him this way, I hope you’ll take a moment on July 4th to honor him with me as I close my eyes and pray that he’s watching over us as we light firecrackers, drink beer and reminisce on Becca’s Bactine-cured hand out at his shop.  July 5th will undoubtedly be a hard one for me, as that’s one-year gone, but gratefully I’ll still hear that beautiful, unbridled laugh in my heart.