It’s a little late to be writing this post. I think the first real full-on, throw myself down on the ground, inconsolable crying, gummy bear impersonation of a fit happened almost a month ago.

Jess has all these little tricks. Get down on your level. Talk it out. Walk out of the room. Change the subject. Find something to laugh about. Lots of things that a good parent should do.

Dad is most un-good at E.K. fit time. I like to think of our daughter as an Anytime FITness gym. Doesn’t matter what time of day or where you are, you’re always close to a fit.

It kind of starts with Emmy, and I’m paraphrasing here, saying “I want this, that, this and that, this or that, and all of that.” The true manifestation of these complicated needs happen to sound more like “uhh, uhh, uhh…” while she’s pointing. Which makes communication somewhat hard in those moments.

Emerson is an excellent communicator for her age, really. I do want to state that for the record. But that advanced ability is hampered by hunger, tiredness, hot or cold temperatures, and anything else that makes humans a little cranky.

It’s really funny to me how all little humans basically have the same emotions. Or ineptness in expressing said emotions. And that just breaks us down into uncontrollable crying, irrational thought and the ever-famous “don’t touch me” attitude. 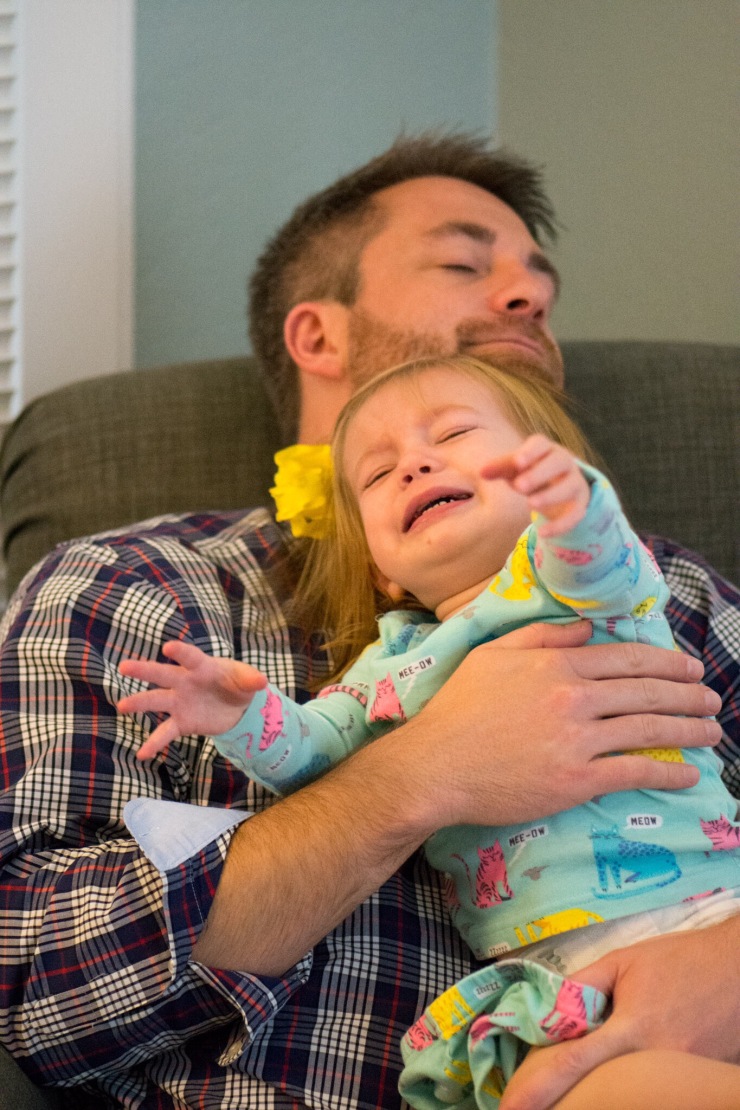 I’m 50/50 on Emerson when it comes to fits. Somedays I have all the patience in the world. I laugh about it and change the subject and handle her fits like an adult. Somedays I have zero-point-zero patience and want to set my little gummy bear on the curb for the ants to eat.

I think all parents do it. They reach a breaking point in their day, likely 15% to do with their child and the rest to do with all the other pressures of adulting, and just snap. Whether that snap is a branch, a twig or a snow pea (or whatever peas you have to snap…don’t tell me they’re called snap peas…). There’s always that straw that broke the camels back.

My advice to parents is to go outside, take a breath, do whatever it is you can to not let your child see your frustration. I truly believe that those moments stick with them longer than the loving moments. It’s human nature. Fairly sure I’ve made that analogy before on here.

But then there was this moment. Last night. Putting her to bed for the second time. A last milk nightcap. And watching her fall asleep like I have hundreds of nights now. That thing that many fathers have told me before. The indescribable love you feel in those moments.

The neatest thing in that moment for me (not the first, I’m not cold-hearted enough to wait until she’s like 20 months old to love her) came the next day. A friend at work shared the news that his wife was 9.5 weeks pregnant. I wanted to tell him all the things he could expect. Point him to the blog and just say read, but make sure you ask me questions. I wanted to describe to him those moments that my friends had described to me.

But I couldn’t put it into words. As so often I can’t. I just know that I looked down at that little child’s confusingly-colored hair (seriously… is it going to be blonde, reddish-blonde, brown, brownish-red…) and noticed each little miracle of a strand individually. And started to count them and see them like blades of grass in a lawn. All kind of beautiful on their own but part of a bigger picture. And that’s something I wanted my friend to discover for himself.