To E.K. at 3.5, there’s no telling what a fairy is to her. My imagination runs wild for her. And then I remember she’ll never remember.  She’s only three.

We went to the Arboretum to the Arts Festival. Not sure what the official name was, but it didn’t really matter when we walked our way down to the end of aisle 1.

The Fairy Corner. Maybe I’m making up that name. But the two people there watched Emerson at a distance. Clearly they loved the idea. Fairies in little garden houses. They made these beautiful garden stands that were made for fairies to house.

E.K. picked the purple house and we’ve planted it in our entry way pot, along with the dying humingbird-attracting tree. A small hole in the side of the house welcomes a little feather or leaf.

The inside of the house has a bell that has the slightest ding to it when the wind blows. The feather from my pillow offers the entrance for the imaginary fairy.

Each morning Emerson checks the tiny house to see if a fairy is inside. 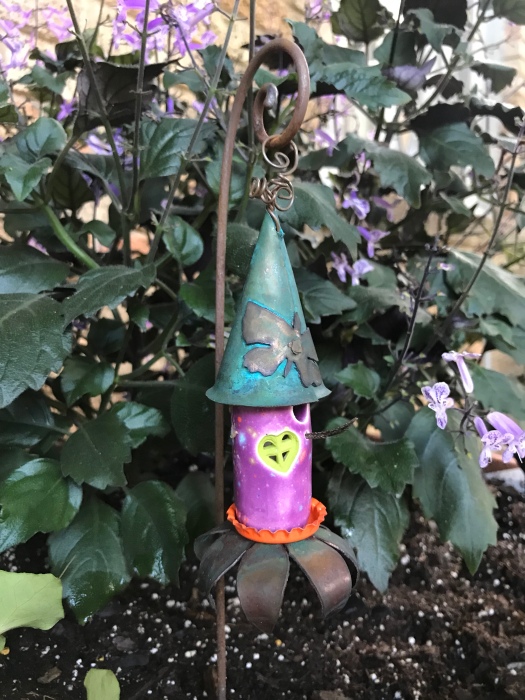 Cow Town is what they call Fort Worth. Or something to do with a Panther, but that’s not for us to bother.

The Horn family had some visitors. Welcomed visitors indeed. The Moores (in-laws) came to town. And we wanted to try something new, so we thought the Stockyards might be a gas.

Driving into downtown FW isn’t anything new, but when Google Maps suggested a northern route out of the main part of downtown, I knew I wasn’t so sure where the Stockyards was.

We followed the AI voice and headed up north from downtown FW. It became evident we’d found our way.

The FW Stockyards boast a train ride, shops, petting zoo, maze, and enough bars to satisfy the thirstiest of men. 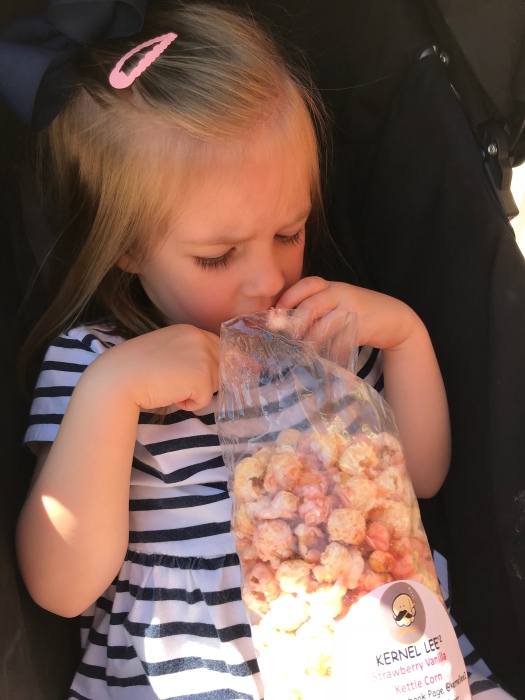 The train was our penultimate goal. All others were gravy. So we enjoyed the pony rides (well maybe E.K. was the only pony-rider), and we walked around waiting for our ticket to be punched.

Choo Choo, our train pulled into the station.  Unfortunately the train posted a sign that suggested no one else would journey along. Yes, the only reason we’d jaunted to the FW Stockyards had been cancelled. Bummer.

Oh, wait. E.K. and I might have had a blast feeding the goats, sheep, llama and others in the petting zoo.  Or at least – dad had a blast. 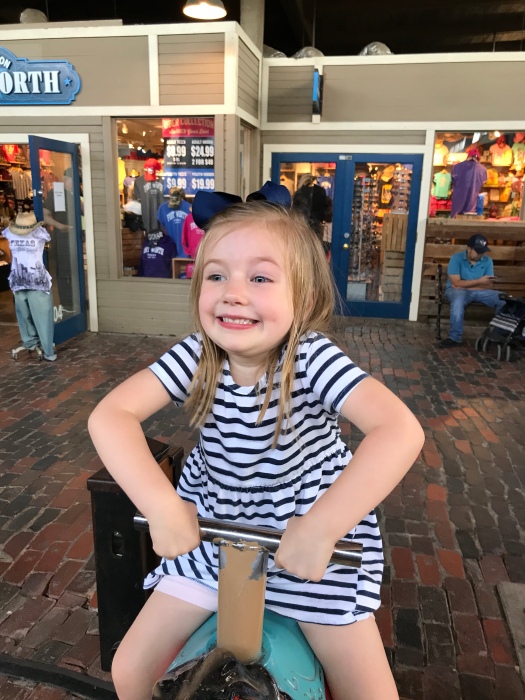 We’ve had a big discussion at Horn Cotton Tales as to when you can post blogs.  Or blog post.  I’m not quite sure the etiquette either way. Point in question is whether you backdate posts to act as if you’ve written them that day (which I do often) or fess up to your laziness and post a whole bunch in one day (which Jess insists on).

So I sit here and post a blog at least four months in retrospect (you can see who won that discussion), hoping I can conjure up what I wanted to post back then. 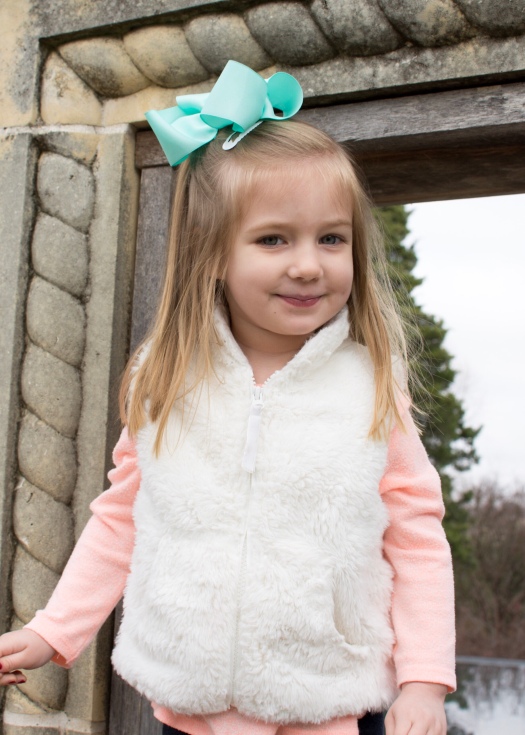 But she’s progressed so much. This age is incredibly fun.  She has a very opinionated view of her world (not yours). All things fall within two categories:  1) I like this, 2) You’re wrong.

In the same dissertation, we’ve suggested one option, another, and then reversed them. For instance, “do you want a blackberry snack or a peanut butter pretzel snack?” Perhaps in this moment she’s watching TV or otherwise distracted.  We’ll always…ALWAYS… get the last answer regurgitated to us. “I want peanut butter pretzels.”

If you ask her in the reverse… Yep, she picks the last thing she heard.  “I want blackberries.”

We try to keep a decent amount of fancy wines. I guess that’s maybe the best way I can describe our wine fridge (which Regan gave to us and actually doesn’t work anymore).

So… our decorative wine rack holds some fancy wines from all over.  France, Italy, Texas. Actually, that’s about it. But those places make amazing vino.

It was a Sunday, several weeks ago. Mom and Dad thought, “why don’t you just pick the next bottle, Emmy.”

She pulls open the wine fridge door and picks the second most expensive bottle we own!

The sign of being good parents – “that’s a great choice, Emerson.”

And it was delicious.

It’s the best 1950’s tell-off. “Go fly a kite!” I imagine the world would be better if that’s the expression we used instead of an alternative.

We were graciously gifted a butterfly kite, I assume from the Easter Bunny. But it could have been Granny Grunt aka GG. E.K. couldn’t have been happier.

So now I’m going to type to all young, new dads only.

Have you ever flown a kite? No, of course not! That’s what the STEM (not called STEM in our day) kids did. But now your kiddo wants you to fly… no… master… kite flying.  Immediately.

We have our work cut out for us. I know we need wind. Let out some string and try to get the butterfly-vinyl in the air. I told the other dads around that they weren’t allowed to witness the first launch. Judgement would be too harsh.

We stalled. Not because of the impending embarrassment, but because of the destined failure. I’m not sure Jess felt the pressure the same as I did, but I welcomed the silliness of the wind. Minus being the sweatiest human on the planet. Different story.

I’m happy to report, flying a kite isn’t so bad. We tried, tried, tried again and figured it out. Now all the kids in the neighborhood want a kite.

We sold the stroller.  When you have the longest, skinniest little girl on the planet, you outgrow things quickly.  Actually I think she’s in the 75% in height and 25% in weight, so forgive the hyperbole.  But she’s definitely hit yet another growth spurt.

Naps have always been difficult.  Lately even more so.  And with her sleeping in her stroller on long walks through the neighborhood better than almost anywhere else, having a scrunched up E.K. and no room for her teddy bear just didn’t seem fair.

Most people opt for the foldup Academy cart or the famous red wagon, but not this family.  In true form, we bought the fanciest wagon possible.  Enter the Veer.

This thing is awesome!  And so far it’s a head-turner.  I’d say we’ve been stopped by at least one person every time we’ve gone anywhere.  It’s pricey as all get-out but seemingly worth it thus far.  Fits two kiddos, has cup-holders for the Yetis, even has an optional basket that we’ve recently acquired.

It’s the best upgrade you never knew you needed.

Emmy is full of surprises.  If it isn’t her figuring out how to unlock the backdoor or open a jar we previously thought impenetrable to toddlers, it’s her spongy brain.  She is learning everything.

Some things are good.  Nay, great.  Our little thesaurus is testing her verbal might daily using new phases and big words she’s heard in books.  I might even say she’s verbose at times.  The latest was when she was making up a story about a zebra in trouble and she muttered, “I gasped!”  Jess and I both looked at one another quizzically.  I knew she’d heard it from a Minnie and Daisy story involving watching a scary movie at a sleepover, and I’m sure it’s in tons of other stories too (anecdote:  books use “I cried” far too often when trying to think of another way to say “I said”).

Then some things are not so good.  Like when dad is driving home for dinner after picking up Emmy from her school.  We describe certain drivers as “going turtle speed” and Emmy even, at times, suggests I honk at them.  Possibly even insinuates I should yell out the window.  Not that I’ve ever done that.  Yes, our daughter has developed some road rage and some backseat driving.

Emerson is kind of a grizzly bear when she’s hungry. And that’s okay as long as we know how to fix it. We do a lot of cooking at home with Hello Fresh, but we skipped this week with the holidays. So it’s takeout and delivery. Considering how cold it is, I’m okay with that. Fixing the bear inside was nigh upon us last night. It was a rush.

So we ordered Cane Rosso, a Horn favorite. And the fastest “your order will be ready” place ever.

The honey bastard pizza is likely the best pizza you’ve ever tasted if you’re into spicy cut with sweet. Then the focaccia with marinara sauce as EKH’s best friend Olivia demands. Those were must-orders. To top it off, as Emerson is screaming about wanting more “screen time”, we appeased the grizzly within by promising spaghetti.

And when mom came home with our culinary masterpiece, we got the wrong order. Rigatoni with garlic butter sauce replaced our long, stringy noodles. 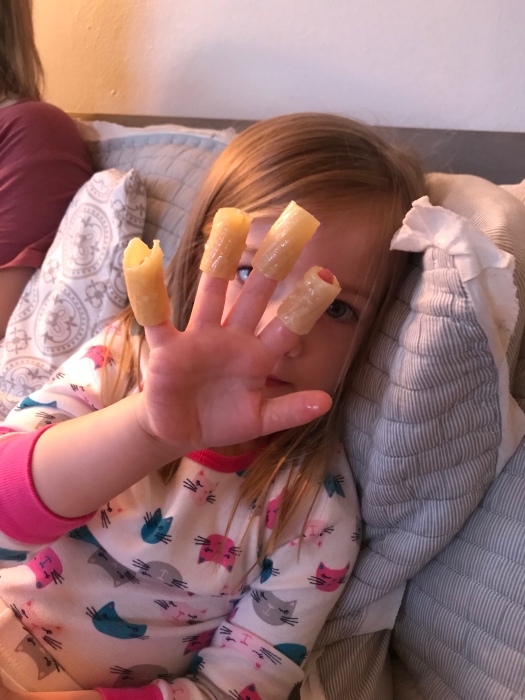 A happy Emerson emerged. And repeated in the morning.

Our sweet little daughter says the darnedest things. Lately, as we’ll ask her things like “are you okay?” she’ll respond with, “I’m am.”  I mean. How precious.

Unfortunately, I’ve been saying “I’m am” at work and people are starting to wonder if I’ve sustained a head injury. No. I’m just dumbstruck with cuteness.

Story-telling isn’t something Emerson has learned from her dad. I’m a horrible story teller when it comes to saying things aloud. I just can’t deliver.

But we certainly have a daughter who can. She’ll entertain mom and dad on our way to and from school with stories of her fictitious cat “Treasure” (the Palace Pet cat of Ariel from Little Mermaid) and “Diego” (Dora the Explorer’s cousin). They’ll be nervous or scared and superhero Emerson will come to the rescue, often with a lasso to ward off the foxes.

The stories are amazing and I’m sure Jess has recorded plenty of them on her phone. One of my favorites of recent was a story about a huge hole in a mountain. I inquired to Emerson as to what could have caused such a hole…?

And so on. For about 10 minutes. Until I couldn’t think of any more animals, real or imaginary. The whole time, we just laugh at every “nah”. It’s truly a fun time playing the “nah” game.